We’ve just added support for integrating tool menus into Visual Studio. This integration supports most of our tools. The menu only shows tools that are installed. Supported versions of Visual Studio are 2017, 2015, 2013, 2012, and 2010.

Here’s what it looks like in Visual Studio 2017 (if you have all of our tools installed). 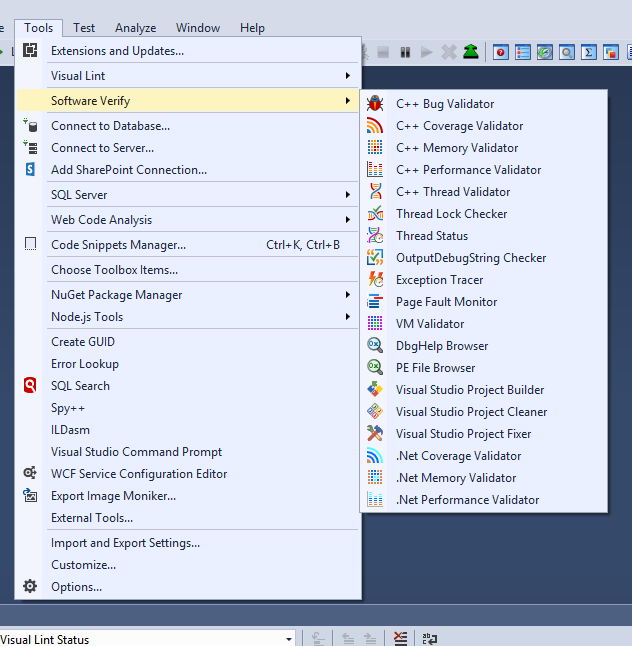 For Thread Lock Checker and OutputDebugString Checker, the tools are given a list of the source files in the project. The source files are scanned for errors.

For DbgHelp Browser and PE File Browser, the tools are given the executable that the project builds. The tools then display data about the executable and/or its debug information as appropriate.

For the various Validators, VM Validator, Exception Tracer and Page Fault Monitor, the tools are passed the same information that the Visual Studio debugger uses to start a program (program name, program arguments, startup directory). The tools then start the target program and monitor data according to which tool has been launched.

The eagle eyed will have noticed that in this list is the name of a tool that isn’t on our website (yet). Exception Tracer. This is a tool that has been in genesis for some time. It has transformed from an experimental debugger, into an experimental code coverage tool and now it’s an interesting view on the internal life of an application, from the point of view of the exceptions it throws. We’ve used Exception Tracer to analyse some unusual bugs that were almost impossible to analyse using a traditional debugger. We’ll be releasing this tool later this year. It will add to our growing list of free debugging and analysis tools on our website.