We recently had a request asking if Memory Validator could detect memory leaks in unit tests managed by Microsoft’s Visual Test and Visual Test Explorer. They told us what they’d tried to do and that it had failed. Our response was to find out what was failing, fix it and then describe what you need to do to use our tools with Visual Test. That’s what this article is about.

There were a few bugs specific to working with Visual Test, plus a very novel environment variable data corruption that can only happen in very unusual circumstances (you almost certainly would not hit these in normal usage of our tools). We fixed these tools, and then experimented with several ways of working with Visual Test. We’re only going to talk about Memory Validator here, but this article also applies to our Coverage, Performance and Thread tools.

You can run Visual Test from the command line, and also via Visual Test Explorer, which is a component of Visual Studio.

The full details of how to work with Visual Test from the command line are documented in this article from Microsoft.

Using this information we know that we need to launch vstest.console.exe and pass the unit test DLL to that as an argument. For example:

Using this information we can launch vstest.console.exe from Memory Validator and pass it to the appropriate DLL. You can set the startup directory to whatever you like. We’ve chosen to set it to the same directory as the unit test DLL. 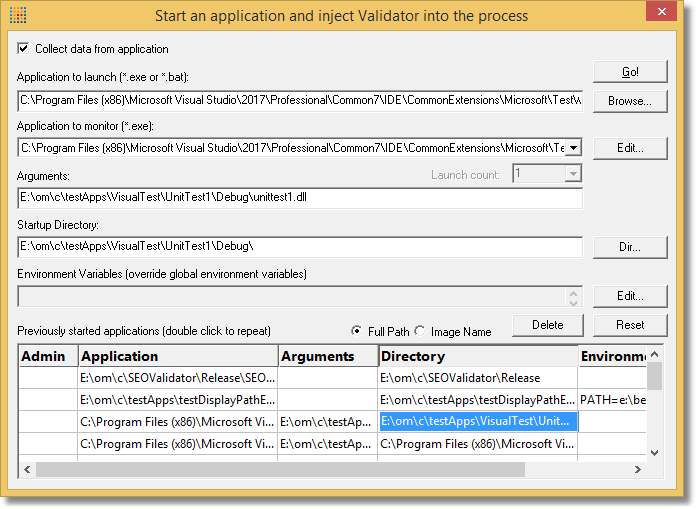 Having reworked the unit tests to support the NT Service API, we now need to launch devenv.exe from Memory Validator, but with instructions to ignore devenv.exe and monitor Visual Test (vstest.executionengine.x86.exe). We do that from the launch dialog/wizard.

Now that we’ve set up Memory Validator to monitor Visual Test when started from devenv, let’s get to work.

Business of Software Europe 2018
How to detect GDI handle leaks