Multithreading is a powerful way to improve the processing throughput and responsiveness of your software. We use it to great effect at Software Verify. In order to manage multithreading successfully it’s necessary to use some form of synchronization between each thread that wishes to read/write data. Deadlocks can result. The main cause of deadlocks is two or more locks (critical section being an example) accessed in different orders on each thread. This has been the subject of much writing, so for now I won’t repeat that topic here.

There is another cause of deadlock which is less well known. The abandoned critical section.

What is an Abandoned Critical Section?

How does this happen?

There are several ways that a critical section can become abandoned.

If you’re using object oriented synchronization locking methods you might want to look at Thread Lock Checker to automate checking for some simple and common errors that can happen.

This is where a thread that is doing some work that has accessed some critical sections is killed by another thread calling TerminateThread(). There are occasions where TerminateThread() can be useful, but this is a last ditch method for dealing with threads. If your code is using TerminateThread() to manage your own threads why not spend some time to work out how not to use TerminateThread and to make your threads end normally (by exiting the thread or calling ExitThread()).

How to detect Abandoned Critical Sections?

We have two ways to detect Abandoned Critical Sections.

Thread Wait Chain Inspector is a free software tool that we wrote that uses the Win32 Wait Chain API to identify various wait chain states of the locks and waits in a given application. Just select the application in question and look at the results.

This tool tells you process ids and thread ids, but it can’t give you symbols, filenames and line numbers. It will provide thread names if you’re working on Windows 10 and you’ve named your threads using the SetThreadDescription() API.

The summary display will show an abandoned count of 2 in the Errors panel. 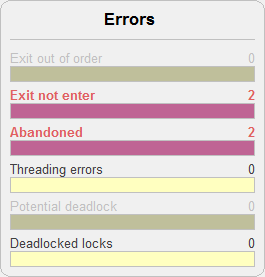 If you click the Abandoned bar in the Errors panel, the display will move to the Analysis tab and the callstacks for the abandoned critical sections will be displayed.

Abandoned because of thread exit

Expanding the callstack entries to reveal the source code…

Abandoned Critical Sections are bad news. They cause deadlocks.

But they don’t need to be hard to track down when you’ve got the right tools to put to work.