Software Verify has a wide range of software tools, some of which are free. The rest of the tools however, do need a licence. You can try any licensed software tool free of charge for 30 days on an evaluation licence, but after that you’ll need to buy a full licence. At the point of purchase you can choose the type of licence – a per-user licence, or a floating licence.

In the following example a team has two floating licences allowing two users to use the software at any time.

When a user has finished using the software, the licence can be released (this happens automatically if you close the application). Licences that are not in use effectively ‘float’ on the network, ready and waiting to be acquired by anyone who wants to use it.

Another user can then acquire that floating licence and use the software:

Of course no-one wants to keep installing and uninstalling software, so each user can have the software installed permanently on their computer and it just remains disabled until you acquire one of the floating licences.

How many floating licences should we get?

One of the main benefits of a floating licence is that it immediately enables every person in an organisation to use the software – just not all at the same time. If you’re currently thinking about licences, you’ll already know that Software Verify’s products are aimed at helping people to build better, more robust, and more compliant software. To better achieve that goal, floating licences reduce the barrier to access for the greatest number of users, and even allow for expansion of a team without needing to buy more licences.

One floating licence enables one user, so if you want more than one person to use the software at the same time, then you simply need to purchase as many floating licences as you think will be needed for simultaneous use.

Floating licences do cost more than per-user licences, so you’ll need to weigh up the benefits of floating licences in your particular organisation. If you’re looking to purchase multiple licences in one go then don’t forget to check the bulk discounts!

If you’re not sure of the maximum number of simultaneous users that you’ll need, it’s perfectly ok to buy a floating licence for a limited number of users to start off with. If you later find that you don’t have enough to satisfy the changing needs of the team, then you can purchase another floating licence for more users and then have them assigned to the first one.

How do floating licences work?

The way floating licences work at Software Verify is about to change (read on), but here’s how traditional network-based licences work.

Typically a computer network makes use of an IP Address which is split into four parts (e.g. 198.51.100.16). The first three parts effectively identify the network. The last part of the address (16 in the example) is different for each computer (host) on the same network prefix and ranges from 0 to 255, so that’s 256 possible host computers on the network.

Thankfully, as an end-user you don’t need to know any of that! So long as it automagically works (which it does) and you can grab a free licence when needed then it’s all good. Speaking of ‘grabbing’, there’s a little bit of etiquette when using a floating licence. If you’re currently using a licence then you obviously don’t want someone else to come along and grab it from under your feet, so users are only allowed to acquire a licence that is already free. As an existing user of a licence, the polite thing to do is to release it when you’re done, in order to free it up so someone else can acquire it.

When you close down a Software Verify application that’s using a floating licence, you don’t need to remember to free up the licence. The application will no longer be sending a regular handshake message and the lack of action will result in the licence being freed up automatically, meaning that no-one else is prevented from working due to someone forgetting to free up their licence when closing the application or shutting down their computer with the software still running.

What if you’ve got a deadline and there’s no licences free? Well, you don’t need to just sit around waiting. If you start your Software Verify application, you’ll see a list of the licences in use, identifying which computers or users are consuming the available licences. You should then be able to contact one of those users and ask them if they can release the licence for you. Once they release it, you can acquire it and it’s all yours.

These days we don’t all work in an office, or share a single network. Being out of office isn’t an entirely new concept of course – you might be at Starbucks (other coffee shops are available), an airport, a hotel, or to the chagrin of your family, maybe you’ve taken your work laptop on holiday! For whatever reason, some users may have zero or limited access to a company network, but they still need to use the licensed software in collaboration with their colleagues.

That’s where Software Verify’s new type of floating licence comes in – effectively the whole internet is your network. You still have a limited number of purchased floating licences related to your organisation, but now the users can be located anywhere in the world – all they need is an internet connection (required) and they can do the same releasing and acquiring of a licence as with the traditional ‘office’ network-dependent floating licence, all with no visible difference in behaviour. 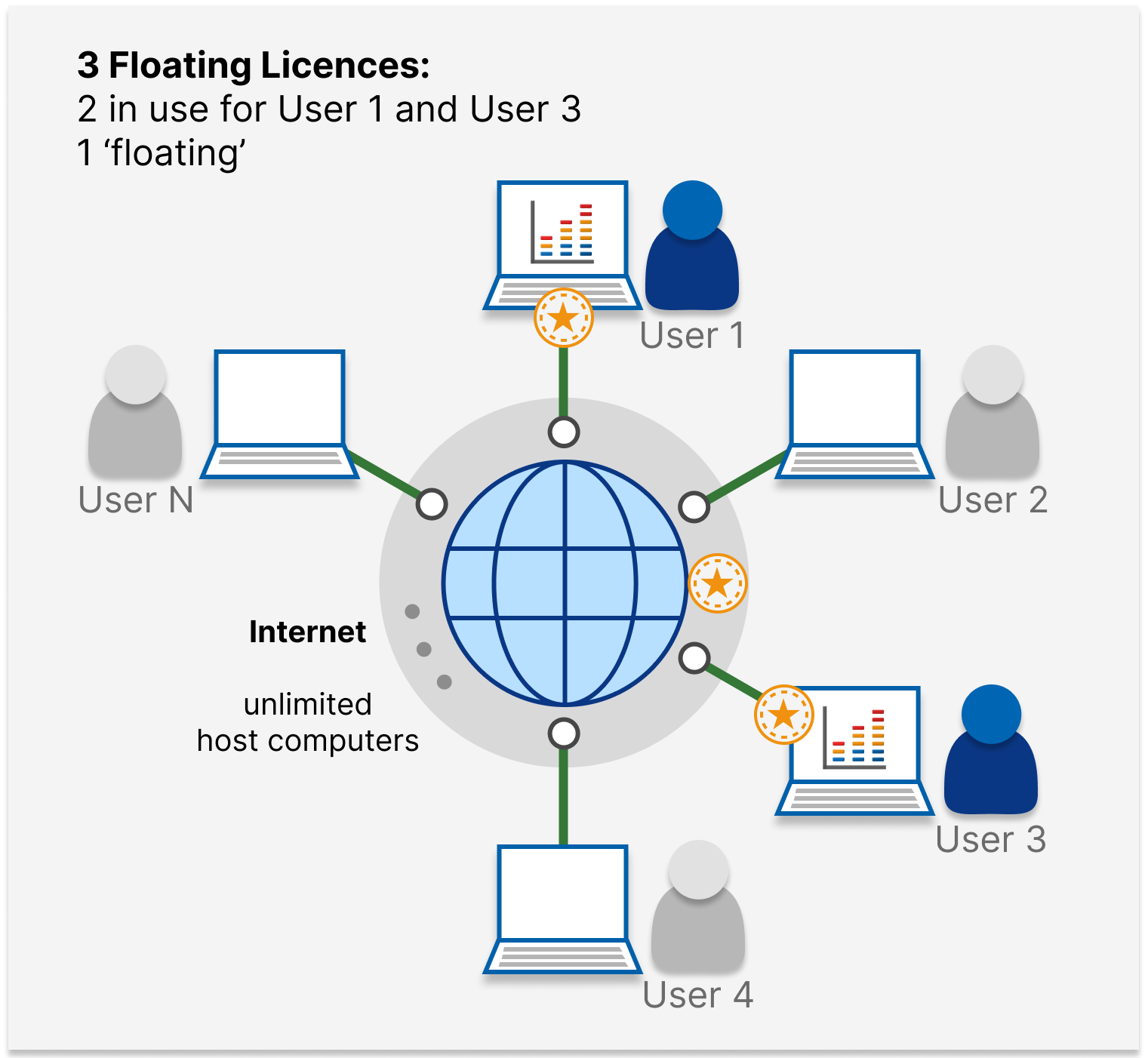 What about licence servers?

These are valid concerns. We’ve heard horror stories over the years from customers with exactly these concerns.

That’s why our floating licence implementation means that we manage the licence server, and it’s our job to make it work correctly for you.

If you still have any questions about floating licences from Software Verify, whether related to purchasing, managing, or supporting licences, or if you need specific technical details then please contact us and we’ll be more than happy to help you with any enquiries.