Multi-threading is becoming quite common these days. It’s a useful way to provide a responsive user interface while performing work at the same time. Our tools report data per thread where that is warranted (per-thread code coverage doesn’t seem to be a thing – no one has requested it in 17 years). In this article I’m going to discuss thread naming, OS support for thread naming, and additional support for thread naming that our tools automatically provide.

Threads are represented by a thread handle and a thread id. Typically the thread id is what will be used to represent the thread in a user interface reporting thread related data. Thread ids are numeric. For example: 341. For trivial programs you can often infer which thread is which by looking at the data allocated on each thread. However that doesn’t scale very well to more complex applications. You can end up with thread displays like this: 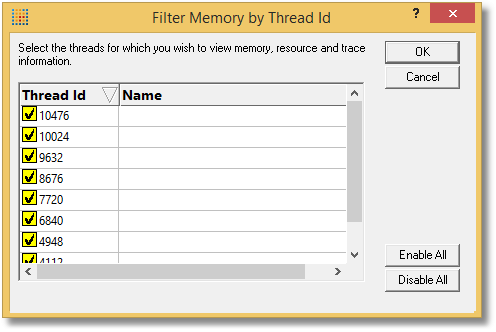 The WIN32 API does not provide any functions to allow you to name a thread. To handle this oversight, Microsoft use a convention that allows a program to communicate a thread name with it’s debugger. This is done via means of an exception that the program throws (and then catches to prevent it’s propagation terminating the application). The debugger also catches this exception and with the help of ReadProcessMemory() can retrieve the exception name from the program. Here’s how that works.

The exception code that identifies a thread naming exception is 0x406D1388. To pass the thread name to the debugger you need to create a struct of type THREADNAME_INFO (definition shown int the code sample), populate it with the appropriate data then raise an exception with the specified exception code. You’ll need to use SEH __try/__except to surround the RaiseException() call to prevent crashing the program.

The THREADNAME_INFO struct address is communicated to the debugger in event.u.Exception.ExceptionRecord.ExceptionInformation[0]. Cast this pointer to a THREADNAME_INFO *, check the number of parameters are correct (4 on x86, 3 on x64), check the dwType and dwFlags are correct, then use the pointer in the szName field. This is a pointer inside the other process, which means you can’t read it directly you need to use ReadProcessMemory(). Once the debugger continues and this event goes out of scope, the ability to read the thread name no longer exists. If you want to read the thread name you must read it immediately, storing it for future use.

The problem with this mechanism is that it puts the onus for naming the threads on the creator of the application. If that involves 3rd party components that spawn their own threads, and OS threads then almost certainly not all threads will be named, which results in some threads having a name and other threads being represented by a thread id. 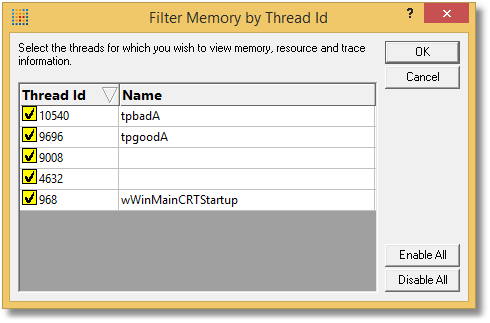 In an attempt to automatically name threads to provide useful naming for threads without having to rely on the author of a program using thread naming exceptions we started monitoring CreateThread() to get the thread start address, then resolve that address into a symbol name (assuming debugging symbols are available) and use that symbol name to represent the thread. After some tests (done with our own tools – which are heavily multithreaded – dog-fooding) we concluded this was a useful way to name threads.

However this doesn’t solve the problem as many threads are now named _threadstartex(). 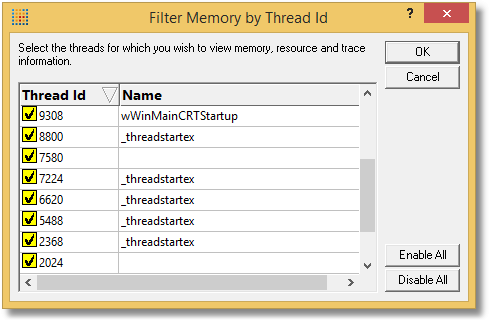 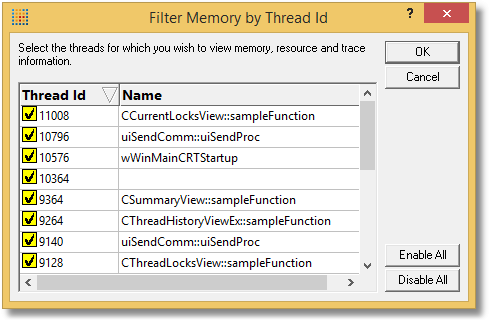 Some threads still end up without names – typically these are transient threads created by the OS to do a short amount of work. If the call to create the thread was internal to Kernel32.dll then CreateThread() will not be called by an IAT call and will not be monitored, resulting in the thread not getting named automatically. This isn’t ideal, but ultimately you don’t control these threads, which means you can’t affect the data reported by these threads, so it’s not that important.

We’ve made these changes to all our Validator tools and updated the user interfaces to represent threads by both thread id and thread name.

If a thread is named by a thread naming exception, SetThreadDescription(), or via a Software Verify API call that name will take precedence over any automatically named thread. This is useful in cases where the same function is used by many threads – you can if you wish give each thread a unique name to prevent multiple threads having the same name.

Here are some of the displays that have benefited from named threads. 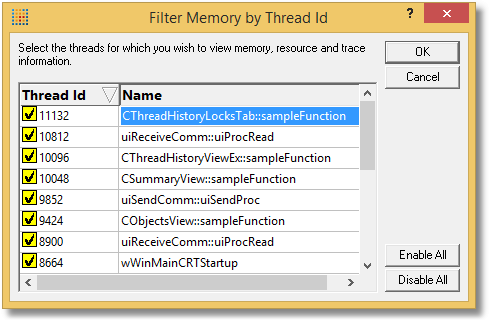 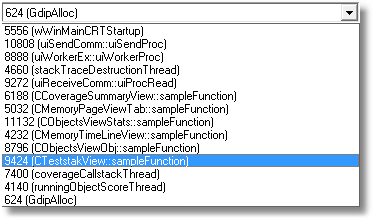