The Curve. A talk by Nicholas Lovell at the Business Leaders Network

gave a talk at the Business Leaders Network meeting held at the premises of Taylor Wessing, London. The talk was preceded by lunch and networking. After the talk there was more networking, a few nibbles and some wine. As usual Mark Littlewood and the wonderful team at BLN hosted a great event. Taylor Wessing’s building provides wonderful views over London and for a change it was the middle of the day so I could see it all (rather than witness London lit up in the evening).

Nicholas Lovell used to be an investment banker. But for the past 10 years he has been studying businesses that work by giving stuff away. He has also released a book, called The Curve which describes how you can make a business around giving stuff away for free. Not all of your stuff. But some of it. It has to have value to the person using it. So you are not giving away rubbish. It must have value of some sort. What value is determined by who your customers are and what they are doing with it.

I recorded the talk. Here are my notes from the talk.

Some people think they have a right to be paid for their work. Nicholas disagrees. You have to earn the right to be paid for your work. By this he means your work needs to be good enough to be worth paying for in a world where (in many arenas) the produce the customer is consuming is provided for free (think apps on mobile phones). 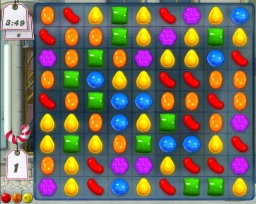 Its phenomenally successful. It’s free. 70% of people that have completed all 450 levels haven’t spent a penny to do so. It’s very popular, consistently in the most gross revenue and most played apps in the app store. It’s compelling evidence that you can make money from free.

Another example: Clash of Clans. It’s a free game but you can purchase items in game. Apparently there are people spending up to $10,000 on a single game.

Of the top grossing 30 applications on the app-store 25 of them are free. 20 games are free, five other apps are not free. Of the top 30, 22 are games, 20 of the games are free. Because something is free that does not mean you can’t make any money.

So how do you make money by giving stuff away for free?

The starting point is you need to flip your thinking. When people who are stuck in the product mindset the first thing they say is “oh dear on the web people expect to get stuff for free” and the reason they expect to get stuff for free is because it’s so easy to share stuff for free on the web. If we look at the app-store there are no hosting costs, no billing costs, no download bandwidth costs (Apple suck this up) if you list your app for free then it costs you nothing per extra user/customer to service that customer (not quite true, but marginal cost tends to zero) and as a result the price of apps fell from $10 to $5 to $1 to in many cases free.

That’s the bad news. You can’t make money that way.

The good news is that this enables you to engage in 1 to 1 relationships with many people for very little cost.

This wasn’t possible before. So you can turn this pricing disadvantage into a cost advantage for communicating with your customers. Sometimes this is actual conversations but more often it’s data about what your customers are doing. Using data to understand your customers.

So when you flip your thinking you get a curve like this: 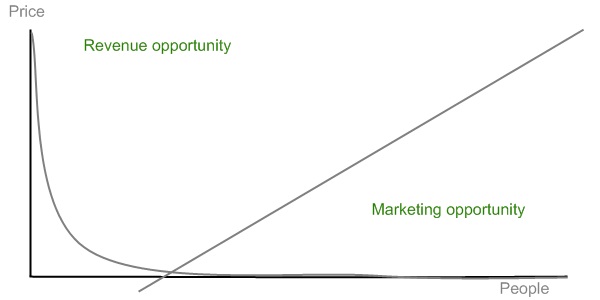 This curve demonstrates that where the price is low or free there are many people that may be interested in what you have. As the price increases there are less people that will be willing to pay. But also note at the extreme left of the graph there are a few people that will pay incredible amounts for what you offer. We can split the graph into two – shown by the grey line. Below the line there is a marketing opportunity. Above the line there is an opportunity for the business to generate income.

Before the web and mass connectivity there was no way to identify who was interested in what you did and who was not. Everyone was offered the same produce at the same price. £12 for a CD for example. But now you can provide music to download for free (to try to entice people to listen who are not hard core fans) but also offer special limited edition CD packs and other promotional material to dedicated fans for much higher prices. Nine Inch Nails is a classic example of this (they ditched their record company years ago).

The people that are not willing to spend money are a marketing opportunity.

The people that are willing to spend money are a revenue opportunity.

What you need to do is work out how to take advantage of these two things rather than think “oh this is so unfair I have to give all my work away”.

How to use this

Looking at the curve you can see there are some people that will never value what you produce enough to pay for it. That doesn’t mean these people are not valuable to you. There are at least four different ways these people can provide value.

What types of technology might you use understand what your customers value?

What do your customers value? You can ask them but they generally don’t know or they will lie to you (conciously or unconciously). Or you can observe them to figure out what it is that they really value.

You can run A/B tests to see which idea people are interested in. Some people think this is amoral because you may be advertising two products neither of which exist and only one of which will be built.

The job of the technology is to enable you to talk to your customers again. Various methods shown below. New methods will be invented in the future. Your job is to identify and use these methods as appropriate.

Super fans are the people that really like your product. They are the people that will consume not only the free version but also pay for all the additional goodies and offers that you have. There are people playing some of the free games on the net that are spending up to $10,000 in a game. OK these people are not commonly occurring but they do enable a different way of pricing.

Think of it as in the past everyone paid $10 for a CD. Now most people pay nothing or very little. But a few people value the music on the CD so highly they’ll pay $100 or $1000 or more for it. The income is the same but the distribution is very different.

One of they important things to understand is that if you game your customer by using psychological tricks (that some people advocate using on the web) and the next day the customer regrets their purchase. Then in that case you have not built a relationship with that customer. You’ve just burned it. These people will not be advocates for your product or company. They won’t tell their friends how great you are – maybe the opposite. So be careful. Do your marketing sensibly. Do not game or take advantage of your customers or force their hand. Offer great value and make the choice theirs.

This section is to show the viability of different tiers. Kickstarter data is freely available. Kickstarter are transparent with their data so it’s a good place to start for data to demonstrate this.

Kickstarter is a crowdfunding platform. Campaigns allow many levels of reward from a few dollars to tens of thousands of dollars. Some campaigns have completely outstripped their intended target. Others fail. It’s worth taking a look around Kickstarter and Indiegogo to see what type of projects get funded (and which are in your industry). (Personal note. I’ve backed projects on both Kickstarter and Indiegogo).

Tim Schafer. Double Fine Adventure project. Funding goal $400,000. Raised $3,336,371 in 30 days from 87142 people. How did he do this? Well first he is well known for his previous adventure game work and has a lot of fans. People choosing to back this project on kickstarter could spend between $15 and $10,000 and receive different reward levels. Four people opted for the $10,000 option (sold out) and 47946 people opted for the $15 level and many other people opted for the levels between. Some statistics:

This pattern is repeated again and again in successful kickstarters.

Not only is it possible to promote and sell digital goods using free stuff it’s also possible to do this with real tangible physical goods. The type of things that gravity affects – they thump onto the floor when you drop them.

It’s also possible to copy physical products using 3D printers. This is coming. People will make models of the thing they desire but cannot afford (or which they cannot obtain in the precise shade of obsidian blue) and then print them on their 3D printer. This will be causal piracy. Often not too precise, but good enough. This is because they love your product not because they are cheapskates.

If we return to physical goods it would be useful to have an example. One such example is King Arthur Flour, Vermont, USA. They have grown from the 5th largest miller of flour in the USA to the 2nd largest. They used a Curve strategy to do this. 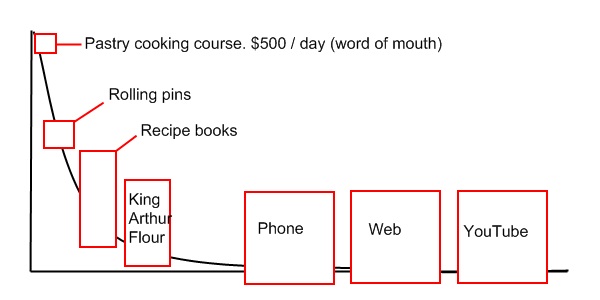 The curve starts at the free end (right) and moves to the paid end (left). Here is how it works: 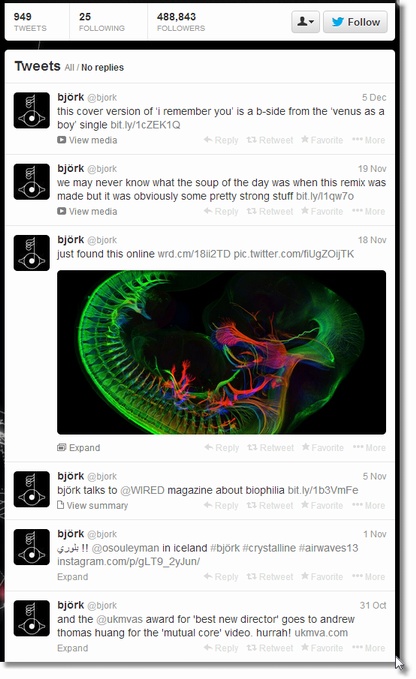 The popstar Bjork had a kickstarter which failed. She had an album biophilia which was a success. She then tried to crowd fund an app called biophilia, porting it from iOS to Android. She asked for $375,000 to fund the port. Seems like a lot of money for a port and also porting from iOS to Android is kind of backwards because iOS people are used to paying for expensive things and Android customers are not necessarily. She had 2.6 million likes on Facebook, 800,000 twitter followers. After 10 days she had only raised $15,000 dollars and the campaign never reached it’s target.

So she had better starting numbers than Tim Shafer but dismal performance compare to him.

Why? Well if you examine her Tweet stream it’s clear she is not engaged with her fans. There is no two way communication. For her it’s effectively a broadcast medium and she doesn’t care what anyone has to say to her. So why should anyone care about what she is trying to start on kickstarter? Exactly. To illustrate the point here is snapshot of Bjork’s twitter stream as of 11 December 2013.

(Personal comment: Her management team do not appear to be very media savvy. Time for replacement. I note also that her twitter follower count has decreased by over 300,000).

You need to care about the people on The Curve.

Love everyone in between.

More information at The Curve Online.

After the talk there was a panel discussion but these don’t tend to turn into interesting essays and it’s impossible to track which speaker is saying what to attribute it to anyone so I’m not going to try.